Looking toward the goal set by the United Nations for the African Union Mission in Somalia (AMISOM) to handover national security responsibilities to Somali Security Forces by December 2021 (S/RES/2431 (2018)), the Field Technology Section (FTS) of the United Nations Support Office in Somalia (UNSOS), in collaboration with its embedded AMISOM G6 Cell, organized a two-day Somalia Force Multiplier and Technology Workshop. It was intended to introduce technology solutions to AMISOM that may be leveraged to ensure the gains made in securing the country are not eroded during the transition.

AMISOM, comprised of Uganda, Kenya, Burundi, Somalia, Ethiopia, Djibouti, and Sierra Leone has been assisting the Somali government in battling the militant group al-Shabaab since 2007. The workshop came at a time when the 22,000-strong peacekeeping force is reducing its numbers, with 1,000 soldiers having left last December. A similar number is expected to leave in February 2019 in a phased-out, conditions-based process adopted by the United Nations Security Council.

The UNSOS FTS-led workshop, held 4 to 5 September in Mogadishu, was attended by senior force and civilian representatives from UNSOS and AMISOM, together with Planning Officers from AMISOM Force Headquarters and the J2, J3 and J5 Cell elements from the six sectors that make-up the peacekeeping force. Observers attended from the United Kingdom Mission Support Team and the United States Africa Command Headquarters in Djibouti and Germany.

The UNSOS-AMISOM workshop drew upon the lessons learnt from the respective AMISOM Sector Commands, and it aimed to 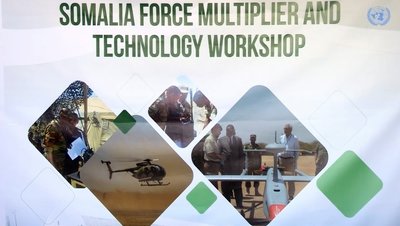 Over the course of the two days, presentations were made by UNSOS; United Nations Mine Action Service (UNMAS); AMISOM Sector Reps and Police; Information, Communications Technology Division; the Innovation and Technology Unit of FTS; and the Intelligence, Surveillance and Reconnaissance Cell. UNMAS provided a display of IED detectors, drones and mine-sweeping machines at the workshop exhibition. Breakout sessions allowed participants to discuss specific topics of interest further, and their findings were presented to all attending at the end of the workshop.

Deputy Representative of the Chairperson of the African Union Commission for Somalia-AMISOM Simon Mulongo gave the keynote address. He remarked that Somalia’s stabilization process had reached a critical stage that needed more investment in modern technology to ensure no security gaps occur during the drawdown phase. He noted that the technology employed should be sustainable, especially during the transition period.

UNSOS Director Amadu Kamara noted that while the tactics used in peacekeeping and warfare had evolved including the use of technology, he conceded that in Somalia its use had not been given serious consideration during this drawdown period. “It is very important that… this concept of operation takes into consideration what technological advantages we can have to make-up for this reduction in numbers”. He noted that to challenge asymmetrical warfare, as in the case in Somalia, situational awareness was necessary.

ICTD Director Anthony O’Mullane said: “Understanding force multipliers is crucial to optimizing force capabilities”. He remarked that the workshop was timely as it presented an opportunity for him and his team to understand the requirements and challenges of AMISOM. In this way, they may better engage with the mission and share their experiences on the use of technology. He informed participants that a Field Technology Framework is in place to support the workshop outcomes through proffering implementable recommendations in the AMISOM context.

UNSOS Chief FTS Allan Canonizado, while advocating for the use of technology to support AMISOM, encouraged the Field Technology community to play an important role towards the evolving domain of force multipliers. Framing the right context is key—vis-à-vis the processes, culture and overall doctrine—to understand how technology can make an impact and/or be applied to a greater effect. “The use of technology is relative in this case as the focus should be on conducting a more holistic approach that will eventually fit the right CONOPS parameters”.

Operations Officer for AMISOM Sector 6 Lt. Col. B. Oloko said that the workshop had identified the gaps when the mission starts to drawdown soldiers, noting they would adopt technology to reinforce its operations.

A final report of the workshop event, which includes the most critical challenges identified with recommendations, was produced by FTS UNSOS and is now under review by ICTD for guidance to determine the next steps.